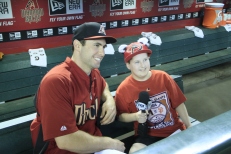 On Sunday, 11-year-old Dean Nunley took his turn at the mic as the Sanderson Ford KidKaster for the D-backs-Giants game. Dean was the third KidKaster this year, and the first to sport a D. Baxter hat while on the job.

Dean started his day by joining Cindy Brunson and Jody Jackson on the “Diamondbacks Live” pregame show, where he interviewed first-baseman Paul Goldschmidt.

Dean being interviewed by Jody Jackson on “Diamondbacks Live”

Dean then made his way into the booth and announced D-backs batting order in the top of the second inning.

Later he took over the airwaves at Arizona Sports 98.7 FM.

After a day of work up in the booth, Dean took a behind-the-scenes tour of the FOX Sports Arizona production truck where he finished his day.